I don’t know about you Trulovers, but I am feeling the gloom of winter and I am craving the return of Spring, pastel colours and the warmth of the sun.  Today’s South of France back garden wedding is just the tonic, with spring colours, a super cute retro Beetle wedding car and a back garden with views to die for!

Fleur and Lee’s love story starts of with coffee (my kind of love story already) as they met whilst Lee as a plumber was working on Fleur’s parents’ house whilst she had moved home to set up business.  Several delicious cups of coffee made by Fleur and the rest is history! Bride Fleur takes us through their wedding planning and big day: “When it came to the location to get married in, we chose a tiny village called Moureze, outside Montpellier. That is where I grew up before coming back to the uk to study. It’s a beautiful village, very authentic and a very special place for us which we go to regularly. We also knew we wouldn’t have any trouble convincing family and friends to join us.

We wanted our wedding to be very personal, relaxed and fun. We didn’t want to have to do anything because of formalities, so it was a very unique and personal day. As we’re an Anglo French couple we wanted to have a touch of both cultures throughout the day. We hired a marquee to go in the back garden of our pretty stone house, which gave us the most amazing setting. We tried to keep things simple and rustic looking.

After a lot of research we chose mostly local suppliers, however they aren’t always very quick to respond in the South of France which made it tricky as we only had about  6 months to plan. The food and wine was very important to us, so we got recommendations from local people for the best around and chose Prouheze Traiteurs from Montpellier, who were amazing. We had a cocktail by the pool with all sorts of local delicacies, many cooked or carved in front of us, which was a real treat for our guests.

We chose wine from two of our favourite wine producers down there: Louis Fabre in Corbieres and Domaine Calage Resseguier in St Bauzille de la Sylve – everybody complimented on how good the wine was . Lee was insistent that we had some British beer, so we also had a barrel of doombar which went down a treat in the hot and sunny weather! It was important to us to have a good photographer who was going to make us feel relaxed and who would take fun and creative shots.  We chose Fleur from Fleur Challis Photography with her husband Kevin who came over from the UK and they were fantastic – the photos speak for themselves!

My wedding dress was from a lovely little shop near Chislehurst/Bromley (Marianne and Jessica) – I fell in love with the short dress and after my sister, mother and I all burst in tears we knew that was the one. Lee’s attire was a surprise as well and he looked very handsome – I was worried about what he’d turn up in on the day but he looked very smart! We opted for a non religious (“spiritual”) ceremony in the village, which was held in a beautiful vaulted room that the mayor kindly agreed to let us use. We did not want to go down the religious route but wanted more than the French civil ceremony, so researched a celebrant that could help us create a personalised wedding ceremony.

We found Ray Thatcher from Weddings Words and Wishes, who is British but lives in the South of France and who gave us the opportunity to create a unique ceremony with our own vowels, readings and text which is just what we wanted. We started with the French civil ceremony before the spiritual ceremony, both translated in English and French in our  hand books for our guests.

We then headed to the village square (in the VW Beetle that Lee restored himself the months leading up to the wedding) where we served Pimms and cordial for our guests and for the people of the village of Moureze; it is tradition in France to invite the people from the village to have a drink with the bride and groom. It was lovely to be able to do this in the village square and felt very relaxed and typically Mediterranean. We found out later that our entire wedding party had rehearsed their moves for a surprise flash mob so the local people must have thought they were mad!! The cocktail hour took place at home in our back garden by the side of the pool, where the caterers set up a variety of canape tables and a few live cooking stations for the hot food, keeping everybody well fed and hydrated for a good couple of hours. The weather was lovely and warm so it was the perfect setting. We had prepared a helium balloon for each of our guests so that we could do a “lacher de ballons” which made a great group photo and was great fun for the kids. We sat down for a 3 course meal with speeches and entertainment prepared by our guests between each course, with a big surprise being a dirty dancing flash mob which was absolutely amazing – even my 93 year old Aunt was dancing!! We had also prepared a surprise for our guests and when we finished the meal (by that time it was about 1am) we led our guests to the back of the house where a surprise band started to play, with its members being my Husband, his brother and my 2 brothers. It was so special.

The dance floor opened and we danced until 6 am, French style – it was amazing!! We had an early start the next day with everybody coming back for brunch so called it a day at 6am, glad that I had planned a comfy pair of flat shoes for the night! My advice for anyone planning a wedding in France is that  the language barrier would be difficult for non French speakers. If I didn’t speak French I think we would have hired a wedding planner. Suppliers in the South of France are very laid back, so dont expect to get a response within the day! But they all provided us with a brilliant service. The best thing to do is to go out there and meet the people, and get recommendations where you can.

Be careful when you choose the dress too as it gets very hot there in the summer !

Try to embrace the local traditions where you can. If you’re getting married abroad you don’t want your wedding to be a British wedding in another country, make it different.

Make sure you make accommodation easy for all your guests travelling from the UK and if you can make a weekend out of it. We met up with must guests the night before in the village restaurant and invited everybody back the day after for brunch and pool time – it was a weekend of festivities!” Finally, French weddings tend to overrun and the sit down meal tends to be around 8pm / 9pm and go on for a few hours. So we warned all our guests about the format of the day (especially for those with children – we provided a baby sitter so that they could go and sleep) and made sure there was plenty of food and wine!

For our honeymoon  we went to lake Maggiore in Italy for a few days until we go to California in the spring. We definitely would recommend our hotel in Maggiore which was beautiful, peaceful and very romantic overlooking the lakes – just what you need for a good rest after all the excitement! ”

Congratulations to Fleur and Lee and thank you to Fleur Challis for submitting the wedding. 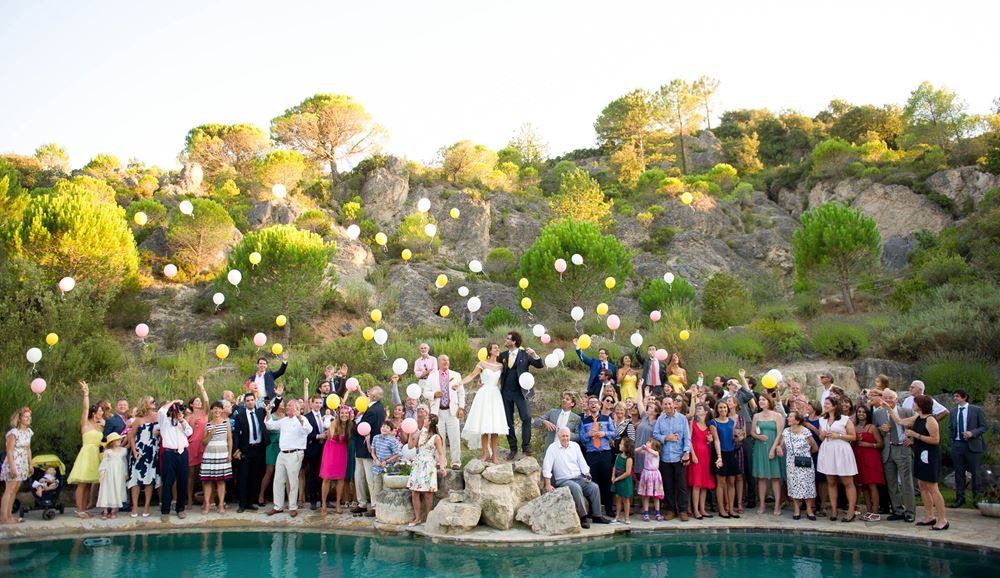 Fleur Challis are professional wedding photographers working across the UK and France - a husband...