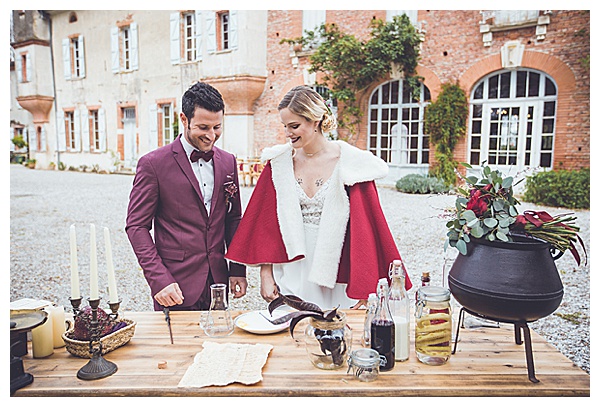 Love and magic are in the air for this Elegant Harry Potter wedding shoot in South West France. We can’t help but nerd out a bit with this one! In true Gryffindor style, the color scheme was a rich marsala with beautiful gold accents at every turn. The couple brewed their own love potion to ensure their love was everlasting and even had a few young wizards in attendance.

All of the pieces came together in an authentic countryside venue just a short brooms flight from Toulouse. So grab your wand and your cloak as we hear from Stephanie Gay, the planner of Mon Jour Parfait, to give us all the magical details of this Harry Potter wedding shoot.. 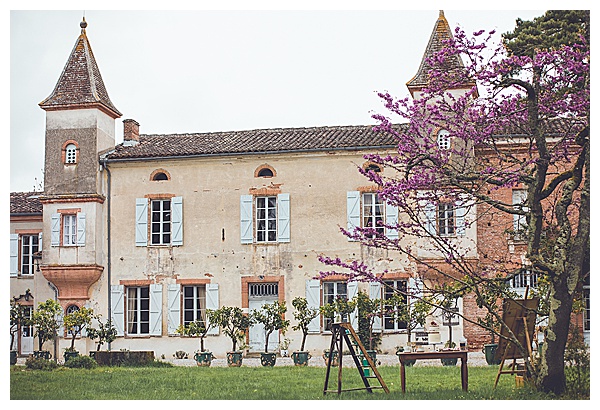 As a fan of the Harry Potter universe, photographer Marie Barcelo launched the idea of a themed styled shoot. A bit later, since I shared the same enthusiasm for the topic, I got involved in the project. We got in touch with some suppliers we knew and whose work we appreciate, and with some others whom we wanted to discover and work with. It was a wonderful surprise and a great mix of vendors. 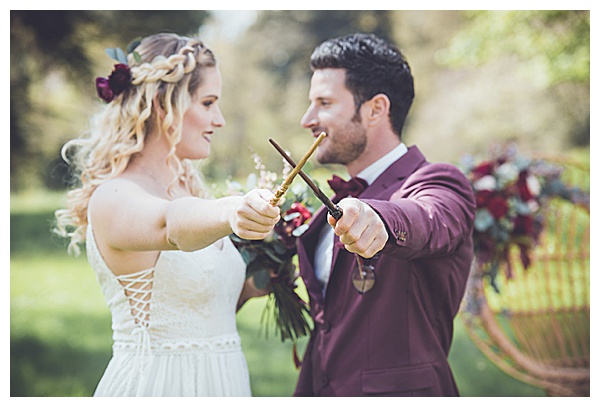 We agreed that the focus would be more on the marsala color than on the wizarding world. We chose to work with a real couple because we wanted to capture their real emotion and complicity. ‒ They are getting married next year and Marie is going to be their photographer! 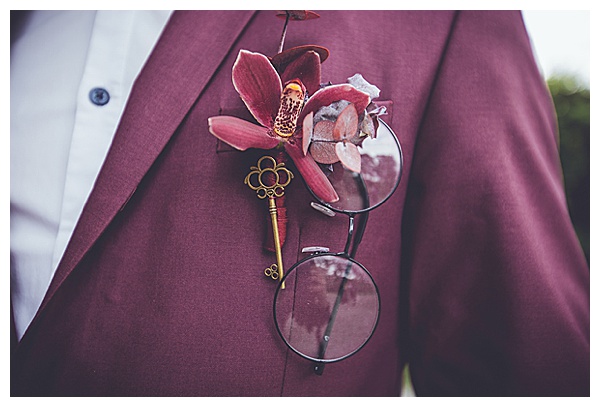 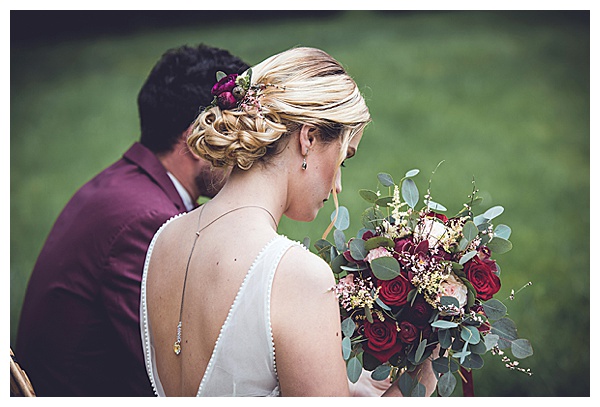 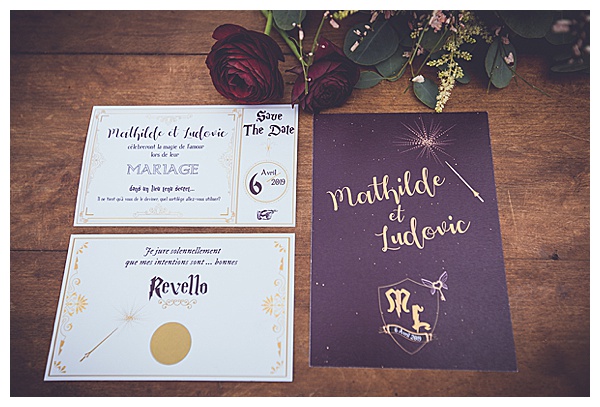 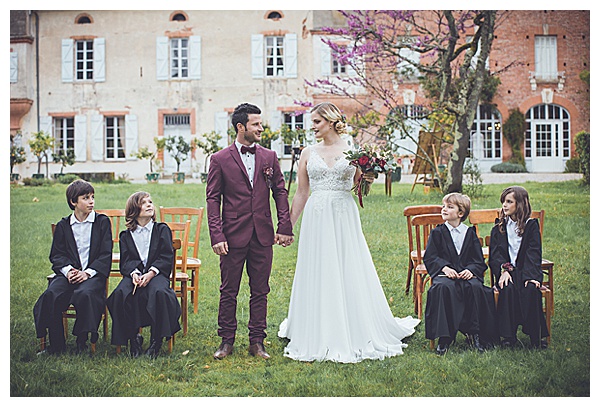 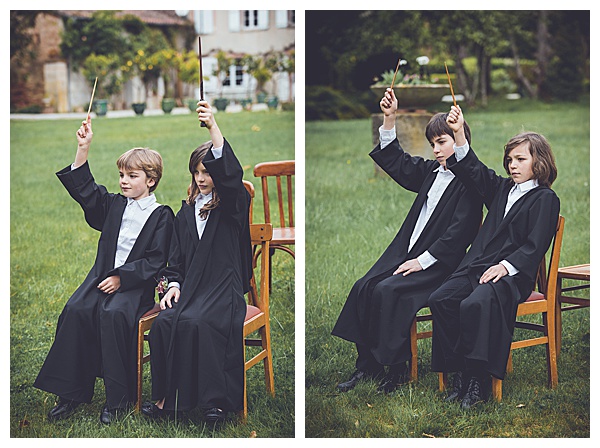 We opted for an open-air secular ceremony in the park of the countryside orangery in Préserville. Four little Hogwarts students attended the ceremony and raised their wands to celebrate the big I do. The celebrant, Celine L, and the children wore outfits designed by “Feerie Couture” that matched flawlessly with the theme. 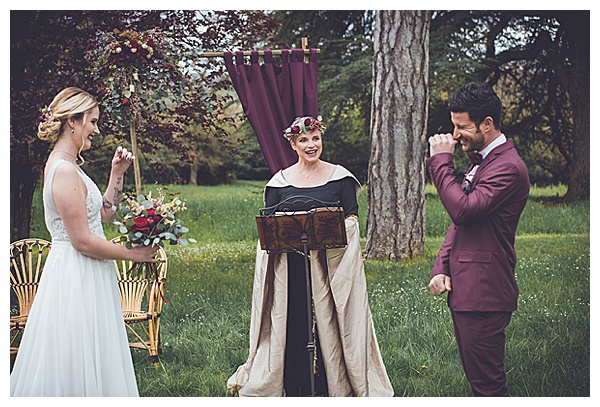 Mathilde and Ludovic’s love story was told in Harry Potter version, which made them laugh and chuckle while standing at the simple floral archway. We chose the ritual of wine: after casting the spell “amplificatum” in wine to reveal its arum, the wine was sealed in a wooden box that will be opened on their 10th anniversary. 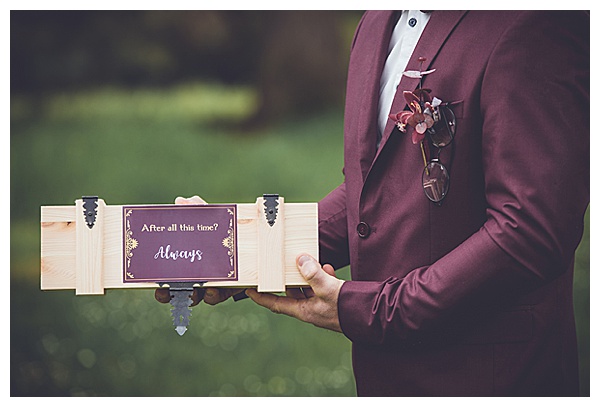 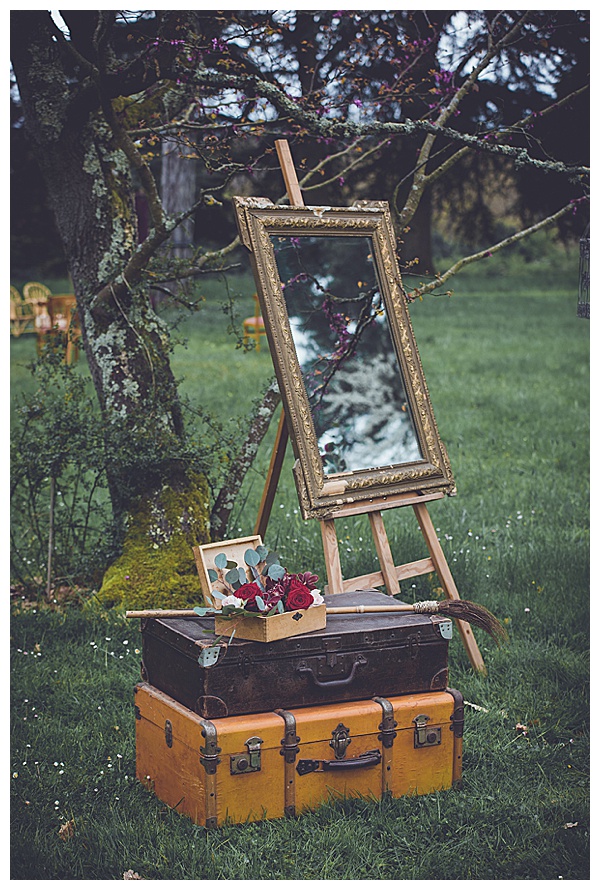 In true Harry Potter wedding style, the bride and groom took a potion that had been prepared by Marie G. All the ingredients were on the table, they followed the instructions to make their love potion “amor-aeternum”, a powerful potion uniting in love wizards, for happiness and eternal love. 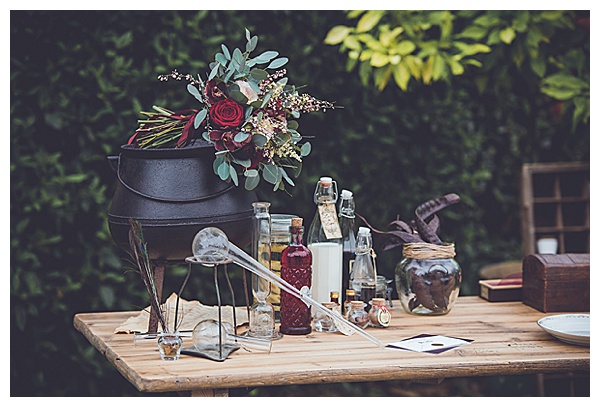 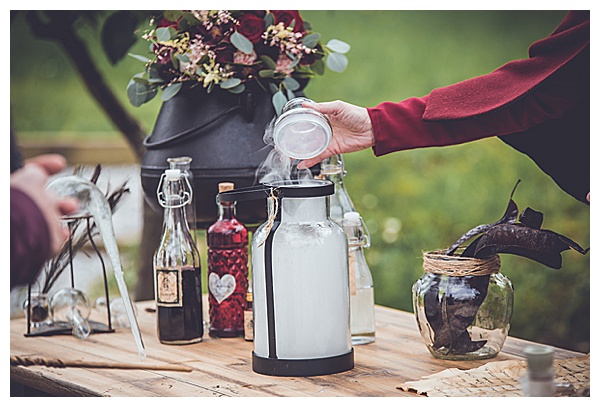 The Love Potion & Spell:  To create the unicorn milk potion the man pours Scotich rose extract, the woman pours 2 drops of tarantula extract, and phoenix tears are added with the wand while saying “Amor”. Mandragore juice is added and then the potion is plunged into the darkness of the cauldron. Then the 2 wizards say the “Precioso” formula with their wand 3 times. Once the potion is mixed, the couple adds delicately horned dragon smoke and pours the elixir. The lovers immediately throw pinches of snake powder on the potion, with their wands saying “amor-passionati”, then they drank the potion together. 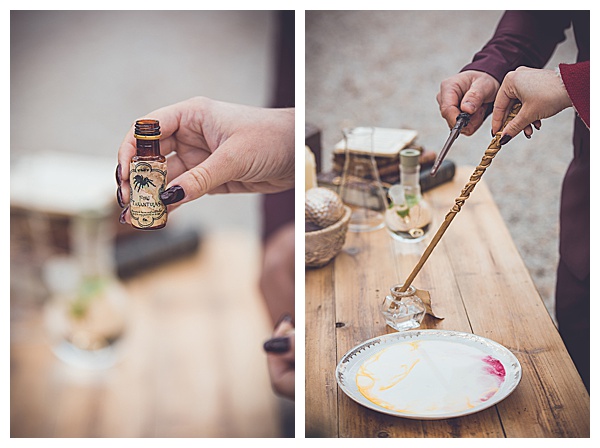 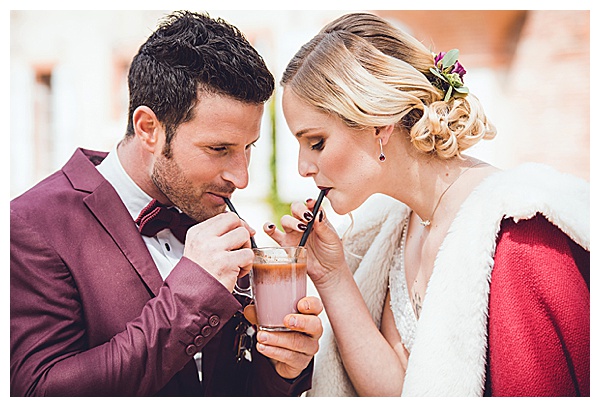 For the reception, the bride changed into a second strapless dress with a more casual hairstyle. The meal took place outside with the magnificent building seen from the outside of the orangery as the backdrop. 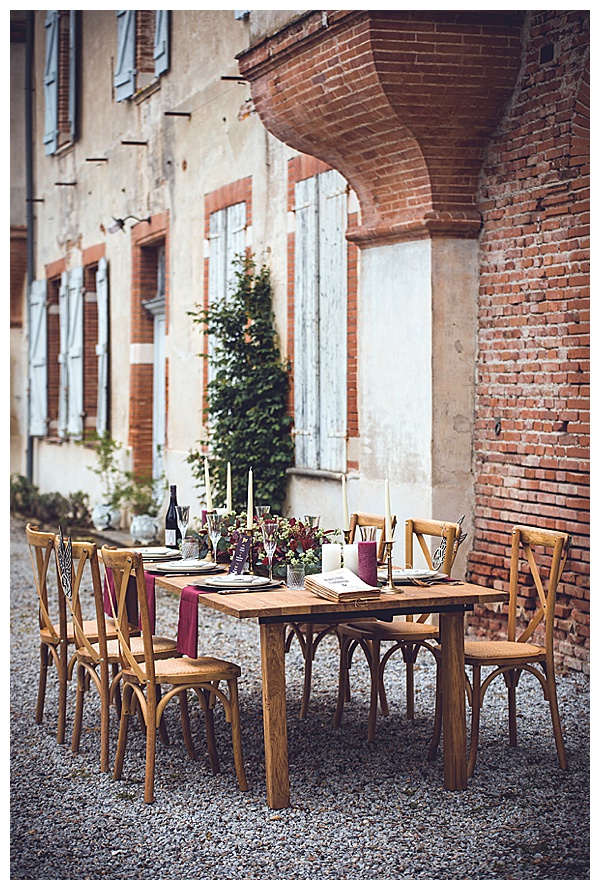 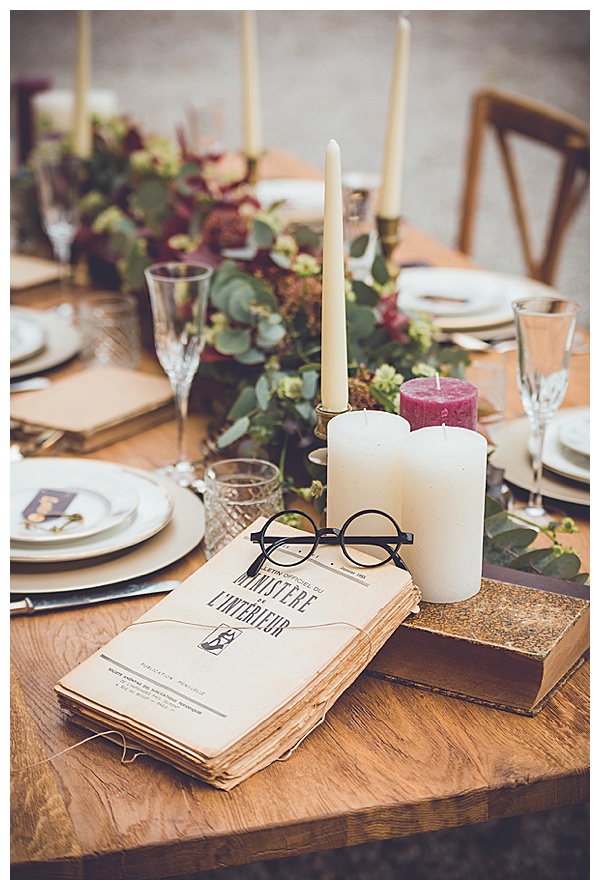 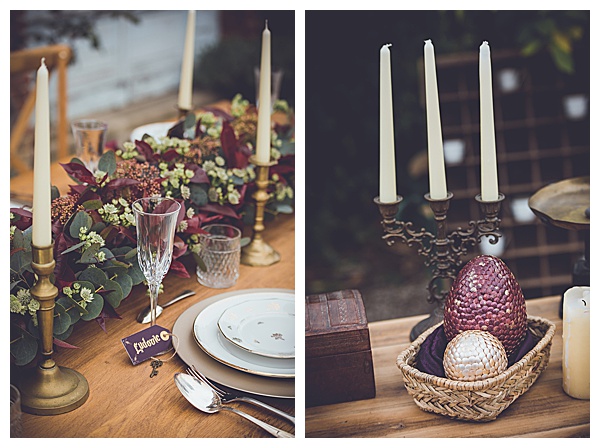 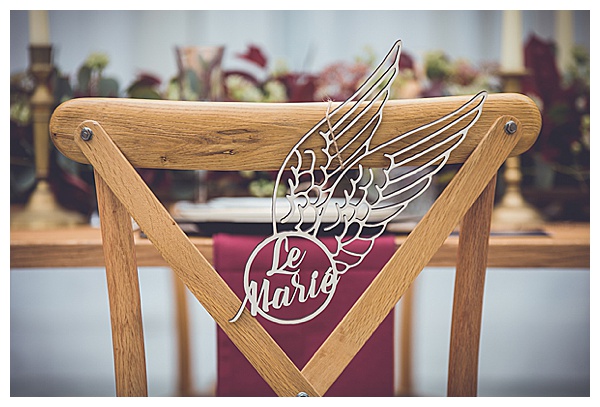 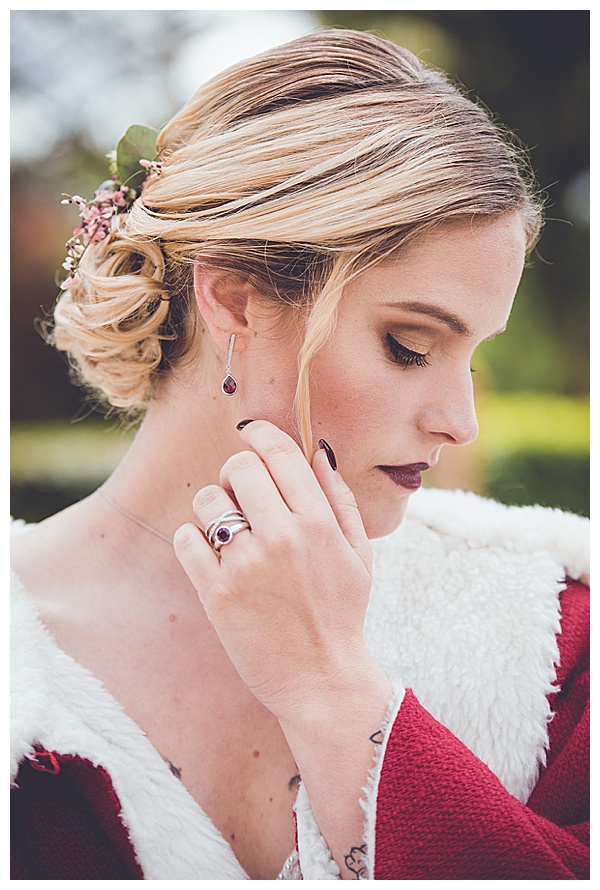 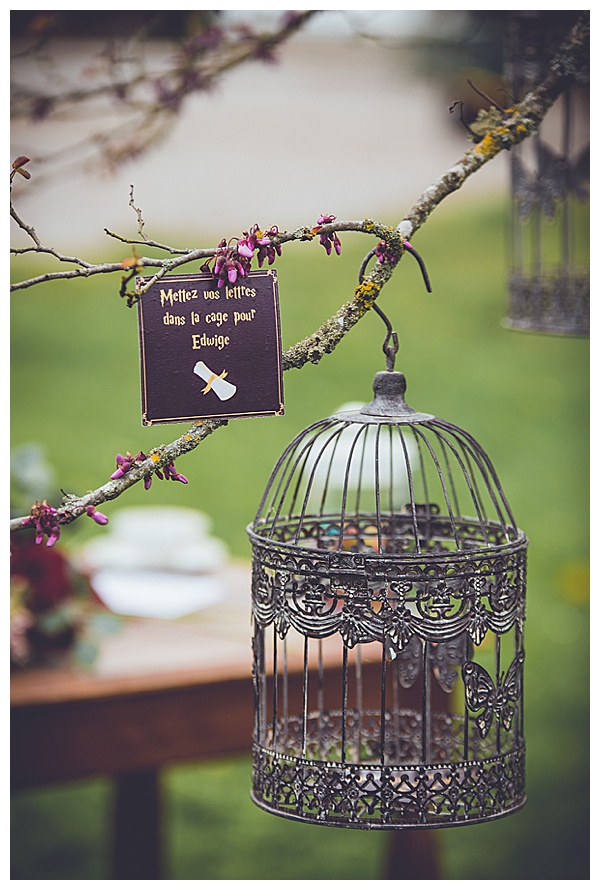 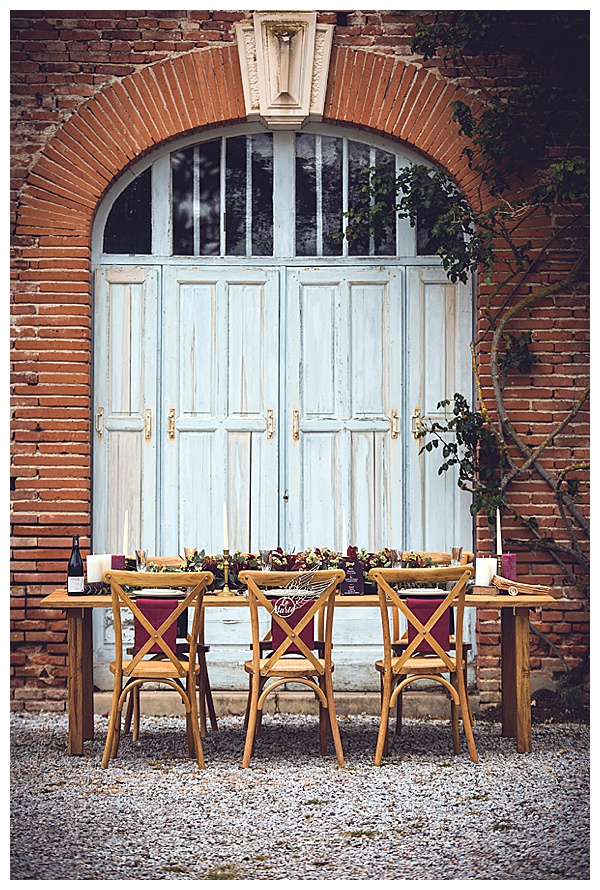 At dessert time, the couple tasted the famous butterbeer with a slice of the naked cake that was filled with Italian meringue cream and raspberries. We can’t forget to mention they enjoyed hand-crafted chocolate wands and a Golden Snitch made in sugar paste. As well as coconut macaroons mounted with white chocolate ganache. 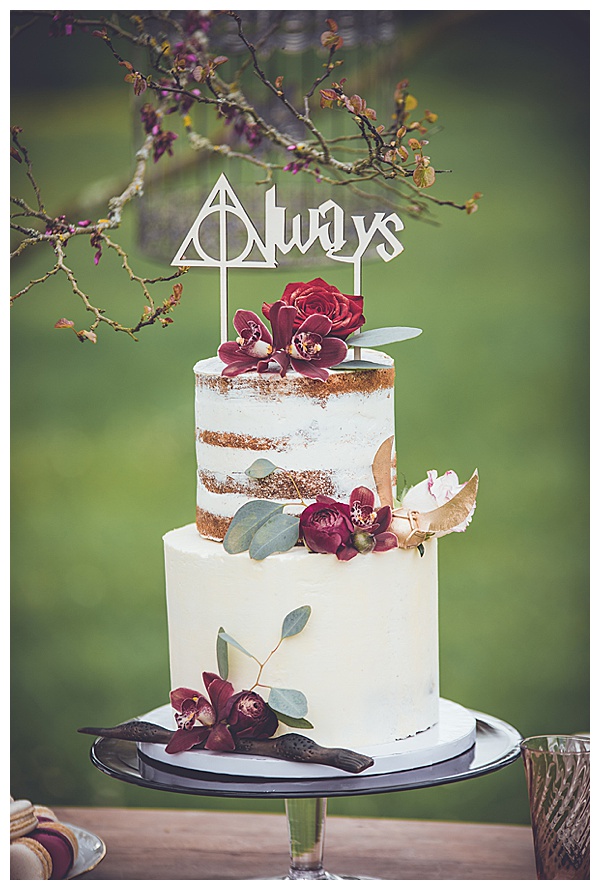 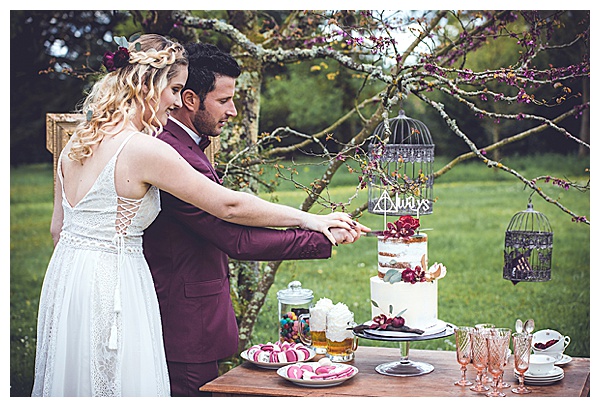 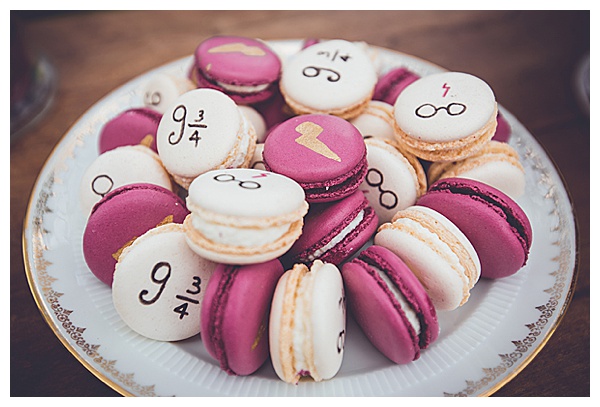 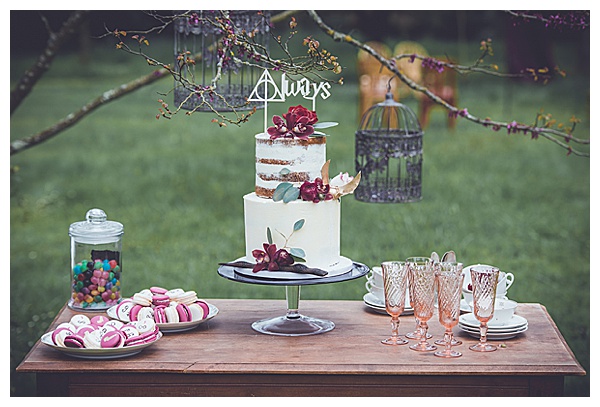 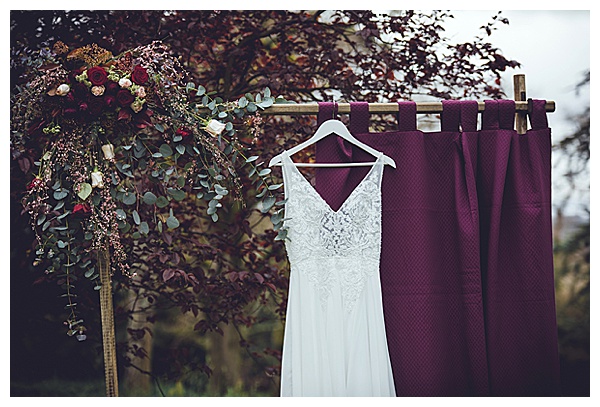 Thank you to all of the suppliers who took part in this magical Harry Potter Wedding styled shoot.